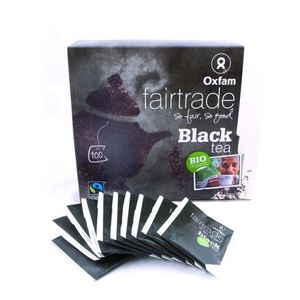 
Organic black Pekoe tea, made from the top two young leaves of the tea plant and packed in string and tag tea bags. Packed locally.

Orange pekoe is a grade of black tea brewed from the dried leaves and buds of the Camellia sinensis plant. Along with other varieties of Camellia sinensis teas, including green, oolong and white, orange pekoe and other black teas are widely consumed throughout the world. Scientific studies and anecdotal evidence indicate that the popular beverage also offers a number of health benefits.

Although green tea generally gets more attention for its health benefits, Czech researcher Martina Bancirova’s comparison of the antioxidant properties of 30 tea samples doesn’t support the bias toward green tea, at least in terms of antioxidant capacity. In an article in the June 2010 issue of “Food Research International,” Bancirova reported on her analysis of these teas, which included several subgrades of orange pekoe tea. Weighing the Trolox equivalent antioxidant capacity, or TEAC, averages of 15 green -- unfermented -- teas against the TEAC averages of 15 black -- fermented -- teas, Bancirova found that they were identical.

Endothelial dysfunction, a systemic condition in which the endothelium, or the inner lining of blood vessels, functions abnormally, is widely implicated as a causative factor in coronary artery disease. A team of U.S. researchers conducted a study to evaluate the short- and long-term effects of black tea consumption on this cardiovascular condition. Researchers divided a study group of 66 patients with proven coronary artery disease into two groups, one of which received black tea and a control group that was given a like amount of water. Short-term effects were evaluated two hours after consumption of roughly 15 ounces of tea or water, while long-term effects were measured after four weeks of daily consumption of about 30 ounces of tea or water. Researchers found black tea consumption reversed endothelial dysfunction in the 50 study subjects who completed the study. Results were published in a 2001 issue of the American Heart Association's publication, “Circulation.”

Based on earlier findings that indicated tea leaves had significant antimicrobial properties, a team of Indian researchers conducted in-vitro testing to see how black and green tea extracts worked in concert with antibiotic drugs against pathogens associated with intestinal infections. Black tea extracts include orange pekoe and other grades of fermented tea. In an article in the July 2005 issue of the “Indian Journal of Medical Research,” researchers reported that both green and black tea extracts exhibited synergistic effects when used with popular antibiotics such as chloramphenicol, gentamycin and methicillin. The tea-drug combinations were tested against E. coli, Shigella dysenteriae and multiple strains of Salmonella.