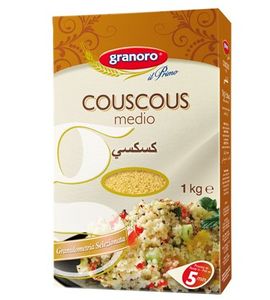 This product is all natural and chemical-free, you can click the small picture and look at the ingredients.

Granoro Couscous is made from high-quality semolina obtained from durum wheat grown in Italy.

The intense colour and irregular shaped grain make it seem like homemade couscous, with a smaller than average grain size in comparison to others available on the market. Granoro Couscous is distinguished by a low humidity value, which increases its shelf life, and is produced using a long, gentle production process.

In addition, the low humidity level gives Granoro Couscous good hydroscopic properties, therefore during cooking or reconstitution it absorbs a great deal of water (or milk or stock) resulting in a high yield. Indeed, it triples in volume after cooking or reconstitution.  Thanks to the pre-cooking process it is subject to, Granoro Couscous is reconstituted by simply adding boiling liquid such as water, milk or meat/vegetable stock and is ready to eat in just 5 – 7 minutes.

Did you know that couscous could be considered the first ready meal in history, thanks to its extremely short preparation time?

Did you know that couscous is not just a typical dish of the Eastern cultures?

Italian culinary tradition is full of recipes that use couscous as its basic ingredient, including: couscous with ham and peas; couscous with fresh, lightly blanched fava beans and pecorino cheese from the Siena area; couscous with Bolognese sauce and parmesan cheese; the famous Caciucco alla Trapanese or alla Livornese made with couscous and fish.

It is recommended as semolina and makes a tasty coating for frying.